‘G.R.A.M.P.I.E.S’ identified as an emerging demographic 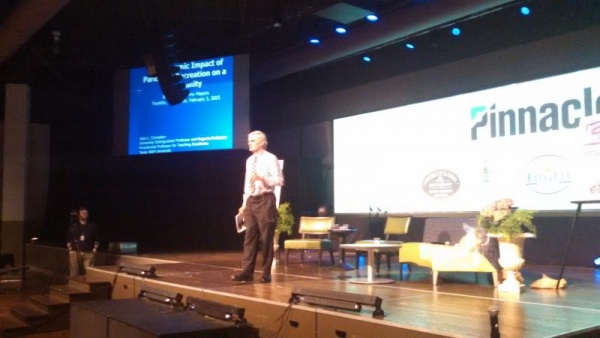 Franklin Home Page
Parks and recreation play an integral role in drawing businesses, attracting retirees and boosting a community’s economy, an expert told local officials Tuesday morning.
John Crompton, an international virtuoso on the economic impact of parks, tourism and recreation services, relayed that message at Franklin Tomorrow’s first Breakfast with the Mayors event of 2015.
It’s one that should resonate with Williamson County officials, who must find ways to attract new companies, grow jobs and find target demographics for relocation as it looks ahead to years of tremendous growth.
Crompton, who is the most-published scholar in the history of parks and recreation, as well as tourism, is currently part of a team in charge of updating Franklin’s Parks Master Plan. It will set the vision for the city’s parks services in the years ahead.
The importance of attracting senior citizens to the county and the link between them and recreational services was the focus of Crompton’s talk on Tuesday.
“There are no great cities in this world that don’t have a great park,” he told the audience at Rolling Hills Community Church in Franklin. “If you were to write down a place of your druthers with no restraints, and in one sentence, write why, more than 80 percent would cite some park, recreational, cultural or environmental dimension.”
At present, Williamson County boasts passive, natural parks, the newest of which is Timberland Park on Natchez Trace. There are recreation centers in each of the four largest communities within the county, with a fifth opening in Nolensville on Feb. 14.
There also are ball fields and historic battlefield parks, and on Monday, the city broke ground on a multi-purpose horse arena on Franklin Road to “bring horses back” to the Park at Harlinsdale Farm.
Last year, Williamson was ranked sixth in the state for tourism.
County Mayor Rogers Anderson said Williamson went up 6.5 percent in hotel occupancy, and the most current numbers for the 2013-2014 year reflect $382 million worth of economic impact.
This year, the county expects to sell 40,000 user passes to its facilities.
And the target market as recreational services grow? Crompton said it’s the “Growing number of Retired Active Moneyed People in Excellent Shape, or GRAMPIES.”

Because they have more time, resources and tend to be engaged in the community, seniors are ideal targets to attract to the county, and parks are a great incentive, Crompton said.

Not only does the senior demographic have stable Social Security and private retirement income, but they’re living in retirement longer than they used to, he said. And they are positive taxpayers – meaning ones that don’t deplete tax dollars with, for example, children in the public school system.
They also contribute to the development of healthcare and because they are out of the workforce, they tend to volunteer time.
“They seek parks because that’s how they socialize,” Crompton said.
But it’s difficult to see how Williamson County’s municipalities are creating incentives to attract seniors through residential development, one unidentified citizen told the mayors and Crompton at Tuesday’s seminar.
“[Seniors] are finding spots to live, and we considered one development with BOMA last year, but it wasn’t in the right place,” Moore said, adding that he would welcome more proposals for senior housing in the future.
Anderson said that while Williamson County is the fastest growing in the state, the unincorporated parts are among the slowest. County territory relies on septic, and moreover, its people like their rolling hills, he said.
“We’ve decided to focus our attention on resources and services,” he said. “I don’t see the county changing its land usage.”
The City of Franklin has more than 700 acres of parks, though Franklin Mayor Ken Moore said parks and recreational projects are often the “stepchild” pushed behind a growing county’s other demands, like roads and school infrastructure.
But parks are essential because they contribute to quality of life – a major draw for individuals and companies who want to relocate, Crompton argued. Once a certain income threshold is met, people seek quality of life over money when they move to a new community.
“Regardless of how quality of life is defined, parks and recreation is part of that.”
Asked by an audience member where the next active park in Franklin would be built, Moore guessed it would be on the eastern side of I-65, connecting to Ladd Park.
Breakfast with the Mayors is a quarterly event. Upcoming dates for 2015 are scheduled for May 5, Aug. 4 and Nov. 3.
Jessica Pace covers Williamson County, Williamson County Schools and the Town of Nolensville for Home Page Media Group. Contact her at jess@brentwoodhomepage.com or follow her on Twitter @Jess_NHP.