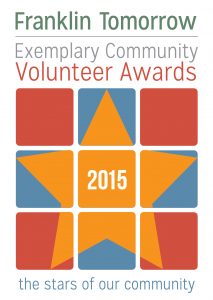 The awards will be presented at the Franklin Theatre. Nomination packets are available by sending an email to donna@franklintomorrow.org or clicking this link and downloading the packet. The nomination deadline is June 12.

Tickets will be available through the Franklin Theatre box office in late June at a cost of $25 per person.

The Volunteer Spirit and the Youth Initiative Awards were created to allow more people to be honored for selflessly supporting local non-profit organizations or agencies. The Ned Lea Lifetime Achievement Award was created in 2011 to posthumously honor an exemplary volunteer. While not presented annually, nominations are accepted each year. Other awards may be created by the Board of Franklin Tomorrow to recognize significant achievement.

In its second year, the Civic Group Award will honor representatives of civic, membership, congregation or non-corporate groups that volunteer together for a cause, while the Corporate Team Award will recognize companies that see the value of giving back to their community through successful volunteer programs with high levels of participation and impact.

Finally, the Corporate Volunteer Award will recognize an individual who as part of a company-sponsored volunteer program or event has made a significant contribution to one or more organizations.