Kicking off the meeting was Williamson Inc. President & CEO Matt Largen, who had the pleasure of announcing that for the first time, Williamson County was leading the nation in job growth. 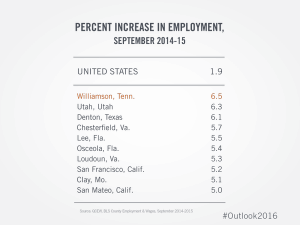 Ann Petersen of Jones Lange LaSalle gave the audience insight into trends of site selection, saying companies are looking for communities that can be their partners. She said with the growing number of millennials in the workforce, there is a value shift in the economy, which is moving toward a free-agent economy rather than a direct-employment economy.

The final panel featured Jim Alcott and Knight Stivender of Alcott Whitney which conducted the data dive for Williamson Inc., which was used in large part to create the Trends Report 2016, which can be downloaded through the prior link.

To wrap up the morning, Largen announced Sept. 12-16 will be Mobility Week, which will be a county-wide initiative focused on practical ways that Williamson Inc., area businesses and residents, can work collaboratively as a community to reduce traffic congestion on area roadways. Ideas include ride sharing, flex-time scheduling, food truck lunches in parking lots, and other ideas.

Williamson, Inc. Economic Development is the single point of contact for the coordination and facilitation of the continued development of the economy of Williamson County and its six municipalities.

The purpose of Williamson, Inc. Economic Development is to grow Williamson County’s economy and improve the quality of life of residents by partnering with the public and private sectors to implement a set of strategic, multi-year initiatives to encourage job and wealth creation.