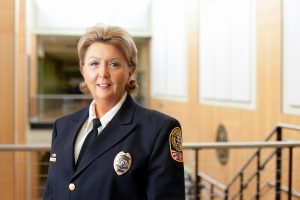 Chief Faulkner leads the 160 men and women who make up the Franklin Police Department. These dedicated officers and civilian staff serve our customers with a professional, progressive, and responsive approach to modern-day policing.

Her topic June 13 will be,  “Frank Talk From the Police Chief: 21st Century Policing in Historic Franklin.”

The event will begin at 9 a.m. in Townsend Hall at the Westhaven Residents’ Club, 401 Cheltenham Ave. with a 30-minute coffee social and then the program at 9:30 a.m. Her topic will be “Frank Talk From the Police Chief: 21st Century Policing in Historic Franklin.”

RSVP by following this link.

FrankTalks is a monthly community conversation series that provides an opportunity for Franklin residents to learn, engage, and discuss topics that help shape our community. The series fits with the Franklin Tomorrow’s goal to engage the community on important topics in our community and inspire discussion which foster collaboration.

Prior to joining the Franklin Police Department in 2014, Chief Faulkner was Tennessee’s first Inspector General. A retired Metropolitan Nashville Police Officer, Faulkner came up through the ranks, serving in Metro’s Patrol Division and various other assignments before retiring from the Nashville Police Department at the rank of Deputy Chief. She has her bachelor’s degree in Journalism from the University of Memphis; her master’s in Criminal Justice from Middle Tennessee State University; and, her doctorate in Human Development Counseling from Vanderbilt University.

Chief Faulkner is the past President for the Fifty Forward Board, YWCA, and the Susan G. Komen Nashville Affiliate. She has also served on the boards of the Girl Scouts, Goodwill, Catholic Charities, CABLE, and Building Lives of Vets.  Chief Faulkner is a recipient of the Athena Award, and was also inducted into the Academy for Women of Achievement.  She received the Girl Scout’s Volunteer Award, CABLE’s Spirit of Leadership Award,the Molly Todd Cup, and the Fifty Forward Harriet Foley Leadership Award.

The Franklin Police Department is Internationally accredited by the Commission on Accreditation for Law Enforcement Agencies.