The City of Franklin was recognized as one of three Healthier Tennessee pilot communities on Wednesday, June 1, through the work of Franklin Tomorrow’s Get Fit Franklin project, which encourages residents to take the first step to fitness by stepping out their front door for a walk or exercise.

In early 2015, Franklin Mayor Ken Moore asked Franklin Tomorrow to further its partnership with the City and use its existing Get Fit Franklin program – founded in 2011 — to represent the City with the Governor’s Foundation for a Healthier Tennessee in an effort to achieve pilot status.

“Community-led efforts like the ones we’re celebrating today are critical to improving the health and quality of life of Tennesseans,” said Gov. Bill Haslam, who made the presentation to Mayor Ken Moore  with state Rep. Charles Sargent on hand for the announcement. “I congratulate these communities on their efforts to encourage and enable healthy living, and I hope all Tennessee communities will strive to do the same.” 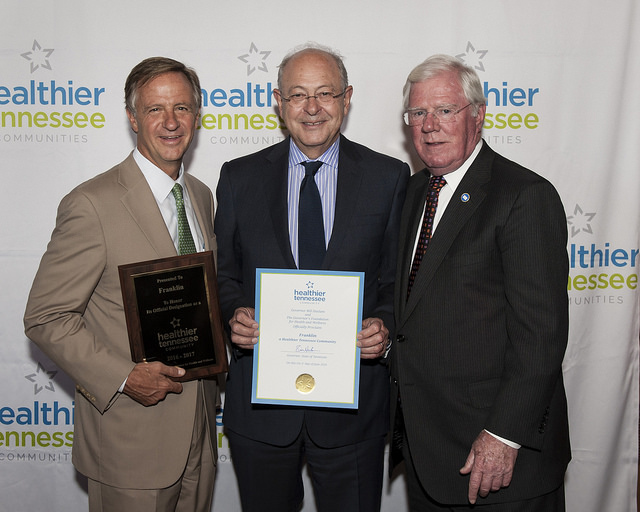 The existing Get Fit Franklin committee evolved into a Wellness Council, which meets regularly and in partnership with other governmental, health, and interested organizations and individuals. Financial support was provided by Vanderbilt Health, BlueCross BlueShield of Tennessee, and Williamson Medical Center for a variety of activities related to healthy eating, reducing tobacco use, and increased physical activity.

Activities have included the Mayors’ Healthy Cookoff in June 2015, a weekly walk for one hour at the Park at Harlinsdale Farm, and increased attention at Franklin Tomorrow’s Breakfast With the Mayors on topics related to health.

The foundation launched the Healthier Tennessee Communities initiative in March 2015 with nine pilot communities, including Franklin and Tullahoma. Four communities in West Tennessee and three in East Tennessee have also earned the designation.

The Governor’s Foundation for a Health and Wellness is a non-profit corporation dedicated to enabling and encouraging Tennesseans to lead healthier lives. It brings together a statewide coalition of employers, health insurers, hospital systems, local governments, school systems and healthcare-focused foundations and community organizations to effect positive, measurable change. The Healthier Tennessee initiative strives to increase the number of Tennesseans who are physically active for at least 30 minutes five times a week, promote a healthy diet, and reduce the number of people who use tobacco.