Deadline is July 15 for nominations for Aug. 17 event 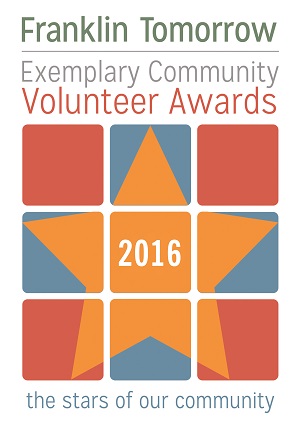 The awards will be presented August 17 during an event open to the public at the Franklin Theatre, with support from Vanderbilt University’s Office of Community, Neighborhood and Government Relations, FirstBank at FivePoints, The TMA Group, state Rep. Charles Sargent, and state Sen. Jack Johnson, among others.

“Through these awards, Franklin Tomorrow hopes to show what can happen when volunteers come together to make an impact on our community,” Murphy said. “Nominations are accepted in a variety of categories from individuals, nonprofit organizations and other entities, such as schools and businesses.”

The Volunteer Spirit and the Youth Initiative Awards were created to allow more people to be honored for selflessly supporting local non-profit organizations or agencies. The Ned Lea Lifetime Achievement Award was created in 2011 to posthumously honor an exemplary volunteer. While not presented annually, nominations are accepted each year. Other awards may be created by the Board of Franklin Tomorrow to recognize significant achievement.

In its third year, the Civic Group Award will honor representatives of civic, membership, congregation or non-corporate groups that volunteer together for a cause, while the Corporate Team Award will recognize companies that see the value of giving back to their community through successful volunteer programs with high levels of participation and impact.

Finally, the Corporate Volunteer Award will recognize an individual who as part of a company-sponsored volunteer program or event has made a significant contribution to one or more organizations.