New York Times-bestselling author Robert Hicks was the featured speaker on Monday, Oct. 10, at Franklin Tomorrow’s monthly FrankTalks lecture to discuss his latest book, “The Orphan Mother.” Hicks told stories about the book’s origins to those attending the event, presented by Vanderbilt University’s Office of Community, Neighborhood, and Government Relations in partnership with the Williamson County Public Library and Ingram Content Group.

His third historical novel, Hicks said he did not set out to write a trilogy of books about Franklin during and following the Civil War and the pivotal Battle of Franklin, but since writing his New York Times bestseller, “Widow of the South,” he had always been drawn to the story of Mariah Reddick, who is the central character in “The Orphan Mother.”

Copies of the book are available through the Williamson County Public Library and programs are being organized for book clubs, church groups, and others to read the book as part of  a “community read” program to allow for discussion of the book’s themes of racial equality and justice. 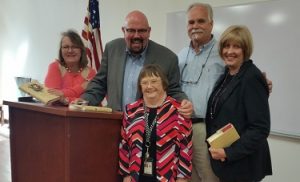