The Feb. 13 Franklin Tomorrow FrankTalks focused on behavioral and mental health issues in Williamson County, with speakers honing in on the relationship between environment and well-being.

As reported by Carole Robinson of the Williamson Herald, while suicide ranks ninth in Tennessee for leading causes of death, in Williamson County, it is the second leading cause of death.

FrankTalks is a monthly lecture series presented by Vanderbilt University Office of Community, Neighborhood and Government Relations. It addresses topics and issues during its monthly sessions on the second Monday of the month at various locations across the city and county.

BlueZones, first identified by author and researcher Dan Buettner, are places “across the globe were people were living longer better simply by living in places that supported improved health and well being,” Acker said, adding their environment supported their well-being.

Research uncovered nine common denominators relating each of those locations, Acker said. The environments encourage natural movement such as walking or working in a garden. The people have a sense of purpose – a reason to get up in the morning. They’ve established a protocol for managing stress, which includes praying, napping or enjoying a happy hour.

Healthways, which is based in Franklin’s Cool Springs, now works with Buettner to establish new BlueZones across the United States. The company and Gallup formed a 25-year partnership that merged their respective areas of expertise in surveying, clinical research, and behavioral economics to create the Well-Being Index. The Index asks individuals about their well-being in 5 domains: purpose, social, financial, community, and physical.

“Since 2008, we have collected data for every MSA, congressional district, and state with surveying done seven days a week,” Acker said, adding the company uses landline and cellphone, in English and Spanish. To date, they have collected over 2 million survey responses.

He was able to provide research specific to Tennessee, Williamson County, even down to Franklin. The research showed high stress and depression rates, something which has given local officials pause and reason for concern. 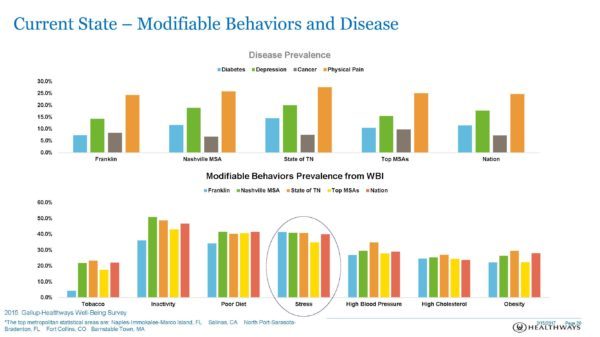 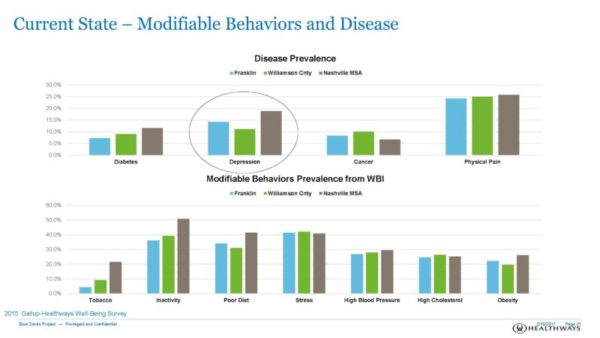 For every Blue Zones Project community, Acker said Healthways conducts a well-being oversample before the project begins to get an accurate snapshot of the baseline state of well-being and conduct oversamples bi-annually afterwards to track changes in well-being over the span of the project. In addition to the Well-Being Index, Healthways also measures a number of other progress and outcome indicators at the organization and community level to track progress over time.

According to Moore, “We’re doing great [in Franklin] compared to the rest of Tennessee but not with the rest of the country.”

People in this county smoke less but drink more, have plenty of healthy food choices and the design of the city with walkways and trails being added is encouraging movement, he said, but added we still have young teenagers smoking, type 2 diabetes is on the rise, opiate use is nearing crisis mode, marijuana use is rising and suicide has risen.

To read the full story in the Williamson Herald, click here.