Panelists during the Franklin Tomorrow FrankTalks on Feb. 12 encouraged the more than 90 people present at the event at the Williamson County Enrichment Center to not shy away from discussing the issues of race, slavery and differences which exist in our cultures.

The panel featured Alma McLemore, board chair of the African American Heritage Society; Rev. Hewitt Sawyers of West Harpeth Primitive Baptist Church; and the Rev. Scott Roley, one of the founders of the Empty Hands Fellowship, with Robert Blair, vice-chair of the Franklin Special School District Board of Education, serving as moderator. 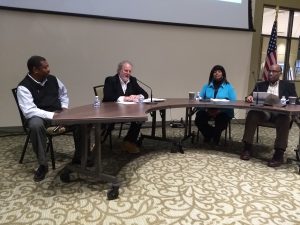 FrankTalks is a free, monthly lecture series presented by Franklin Tomorrow in partnership with Vanderbilt University Office of Community, Neighborhood and Government Relations. It was held this month at the Williamson County Enrichment Center, but moves to a different location across the city monthly.

You can watch the program through this link or by clicking the image at the bottom of this story.

McLemore, a Franklin native, described the creation of AAHS by community leaders in 1992 which led to the preservation of the McLemore House, built by the late Harvey McLemore after he was freed from slavery. His family lived in the home for 117 years until it was condemned and preservationists joined with the African American community to ensure the structure and its history were not lost.

“The past is not pretty, but we can’t ignore it,” McLemore said. “We have to appreciate the work they did. Yes, they were slaves, but they helped build Franklin. We are here because they were there. We can’t say we don’t want to talk about slavery. Yes we do, because we were there.”

Roley talked of his childhood as the son of a Washington, D.C., insider, lunching with the Robert Kennedy family and visiting the country club, but also attending Martin Luther King Jr.’s “I Have a Dream” speech.

“I thought they were protesting because all the statues were of white people,” Roley said.

After a career in the music business, he came to Franklin and was a pastor a large church which ministered to the African American community, but he didn’t meet with ministers serving that particular community, including the late Rev. Denny Denson.

One day he was planning a “unity” meeting for the community and when he asked Rev. Sawyers if he thought Rev. Denson would participate, Sawyers told him Denson didn’t think much of Roley because while his church gave the children experiences and took them to their church, it was not there when they were sick or in need and Roley had never come to Denson to see how they could work together.

“What started out as a confession became a need and I had to put my arms around him,” Roley said, adding for the next 16 years the men spoke daily and were among those who founded Empty Hands Fellowship, an interdenominational meeting of pastors and others who met weekly to pray and discuss issues facing the community.

Sawyers was born in College Grove and lived with his family on a farm where he milked cows and then carried a 10-gallon can to the road for someone to pick up while he waited for the bus to take him to school. He said it wasn’t until he was ready to go to college that he first experienced racism. He recounted other incidents and echoed those who said it was important it remain a conversation in the community.

“Race is always a word that we tend not to want to talk about but it is a word that must be talked about. It is important we deal with it because it is not something that is going to go away,” Sawyers said.

The panelists agreed there is a sense of calm and respect that exists in Franklin, but encouraged the crowd to not be lulled into a sense of apathy because that calm can be pierced quickly by words and actions.

“We need to make sure we are pro-active, no matter the situation, when dealing with race,” Sawyers said.

The next FrankTalks lecture is set for Monday, March 12, at Franklin City Hall in the training room. It will begin at 9 a.m. with a coffee social, followed by a “City Hall on Wheels” program at 9:30 a.m. discussing current topics and issues in the city.