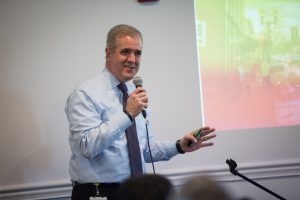 The event drew an almost-capacity crowd at Westhaven Residents’ Center as part of its rotation to sites across the city on the second Monday of each month.

Franklin Tomorrow President Tim Murphy welcomed the audience and thanked High Brow Coffee + Tea for its support through providing coffee for the morning.

Stuckey’s presentation focused on an update of city projects and plans for upcoming projects, with a specific focus on those in the first phase of “Invest Franklin,” the city’s capital investment program. He also discussed a number of other planning documents the city has developed over the last few years, saying the much of the city’s success as a job-growth center and sought-after place to live can be traced to “planning and forward-thinking in place for many years.”

Stuckey also announced as part of his review of upcoming projects a meeting on Tuesday, March 20, at 6 p.m., to discuss the sidewalk project on Franklin Road from First Avenue to Harlinsdale Park. Additional details will be forthcoming, but the meeting is set for 6 p.m. at City Hall. More than 40 parcels will have to be obtained to complete the project.

He also revealed the bid process by the Tennessee Department of Transportation for the northwest extension of Mack Hatcher has been pushed back by state officials to August or early fall of this year as the state looks for a way to use some of the land differently, resulting in a significant savings to the state.

The next FrankTalks lecture will be Monday, April 9, at Franklin City Hall, focusing on organizations and programs serving those with special needs.

About the Author: Carmen Stanek