Retiring State Rep. Charles Sargent will be the recipient of the Business Legacy Award to be presented Wednesday, July 25, as part of the 12th annual Franklin Tomorrow Exemplary Community Volunteer Awards and Volunteer Spirit Awards, at the Franklin Theatre. 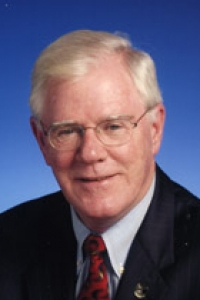 The event will begin at 7 p.m. following a 5:30 p.m. reception at F&M Bank on the Public Square for nominees, their families and ticketholders. A champagne and dessert after-party will also be hosted by F&M Bank.

The awards presentation will begin at 7 p.m. Tickets are available for $25 per person through the Franklin Theatre at www.franklintheatre.com and include the pre- and post-parties, as well as the main event at the Theatre.

The Franklin Tomorrow Business Legacy Award is a continuation of the Business Legends Award previously presented by the Williamson County-Franklin Chamber of Commerce.

This award recognizes an individual who has made significant impact in the areas of business, quality of life, and leadership, according to Tim Murphy, Franklin Tomorrow Board president.

Sargent is retiring after 22 years in the Tennessee House of Representatives, where he has risen to the heights of leadership, chairing the powerful House Finance, Ways & Means Committee. During his tenure in the Legislature and also during his time on the Williamson County Commission, Sargent has been a champion for education. He is given much of the credit for pushing through the maze of committees funding for construction of the Columbia State Community College campus on Liberty Pike.

Charles and his wife Nancy have lived in Franklin since the 1970s, much of the time in the Grassland community. Sargent owns a Nashville State Farm office and is a U.S. Navy veteran.

In 2007, Franklin Tomorrow established the Exemplary Community Volunteer Awards to honor the decades of service and tremendous impact of Anne T. Rutherford, with an award which recognizes the collective effort of an individual’s work, the impact on the agencies themselves, and the community at large. Awards will also be presented in the Volunteer Spirit, Youth Initiative, Civic Groups, Corporate Volunteer Teams, and Individual Corporate Volunteer categories. 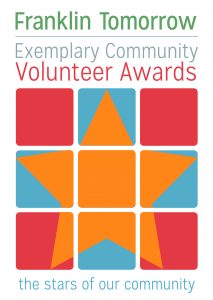 The program on July 25 will include an in memoriam section, honoring individuals who have died in the last year who exemplified service in their lives as volunteers or community leaders.