On Tuesday, January 21, 2019, Franklin Tomorrow released preliminary results from the On the Table community engagement initiative, which drew approximately 1,000 participants at 50 public and private events held over a one-week period in October 2018.

During the organization’s quarterly Breakfast With the Mayors at Rolling Hills Community Church, Franklin Tomorrow Executive Director Mindy Tate revealed some of the trends from the more than 400 post-event surveys completed by participants.

“Three age groups identified the same top next steps for action, which are to learn more about the issue or solution, get more involved in the community, and build relationships and collaborate,” Tate said. “We are an organization with a mission to engage the community, foster collaboration, and then advocate for a shared vision for the future of Franklin. It is encouraging to see a strong desire by citizens to be engaged in identifying and discussing issues which may exist and then working together toward partnerships and new ideas.”

From the survey, Franklin Tomorrow learned:

“Franklin Tomorrow was founded in 2001 and has conducted several visioning and citizen engagement activities since that time,” Tate explained. “In the 2018 On the Table initiative, the top three opportunities for improvement in Franklin, identified by those completing the post-event survey, were similar to those identified in previous efforts, but with a new perspective.”

“This issue of housing rose to the top when asked to identify the top three opportunities for improvement in Franklin today, but the focus was less on affordable housing for low-income individuals, but more fully reflecting on the need for attainable housing options for people in various stages of life and at various income levels,” Tate added.

Second, was the broad topic of transportation, with a desire to see greater connectivity and more pedestrian access between residential neighborhoods, downtown and Cool Springs, and “to morph land planning away from such a strong focus on the car.”

Third was the theme of growth and development, with a strong desire to see the city’s small-town charm maintained while recognizing that growth will, and should, continue.

In 2019, Franklin Tomorrow is making plans on how to continue the conversations which started with On the Table and the community is invited to participate in those activities as they occur, whether they were a participant in the original On the Table conversations.

Ideas being explored include:

“These ideas are just the tip of the iceberg of what can be done in a community like Franklin, which has an engaged citizenry and active business community,” stated Tate. “We had a series of wonderful partners in 2018 for On the Table, including the City of Franklin, Williamson Inc., Franklin Special School District, the Williamson County Association of REALTORS, and a number of local businesses and nonprofits. We want to reconvene with them in February and work toward continued momentum from this effort toward the common goal of maintaining and enhancing Franklin’s great quality of life.”

Serving as On the Table co-chairs for 2018 and 2019 are Mary Lee Bennett, Patrick Baggett, Jim Roberts, and Allena Bell, who became the chair of Franklin Tomorrow’s 25-member Board of Directors in 2019.

Franklin Mayor Ken Moore congratulated Franklin Tomorrow on the successful execution of the On the Table initiative. “Receiving community input is very important to me as well as the City. This personalized and conversational method is going to give us new data and support for ongoing projects and foster new ones,” Moore said. “As a community, we are so blessed with the level of participation from our citizens and their heart to give back. I am eager to continue to review the vision of our citizens and utilize it to keep Franklin a wonderful place to live, work, and raise a family.”

Franklin Tomorrow is a nonprofit, community visioning which has as its mission to engage the community, foster collaboration, and advocate for a shared vision for the future of Franklin. That shared vision is that Franklin will be a city with a robust economy, great people, distinct character, and vibrant neighborhoods. Learn more at www.franklintomorrow.org. 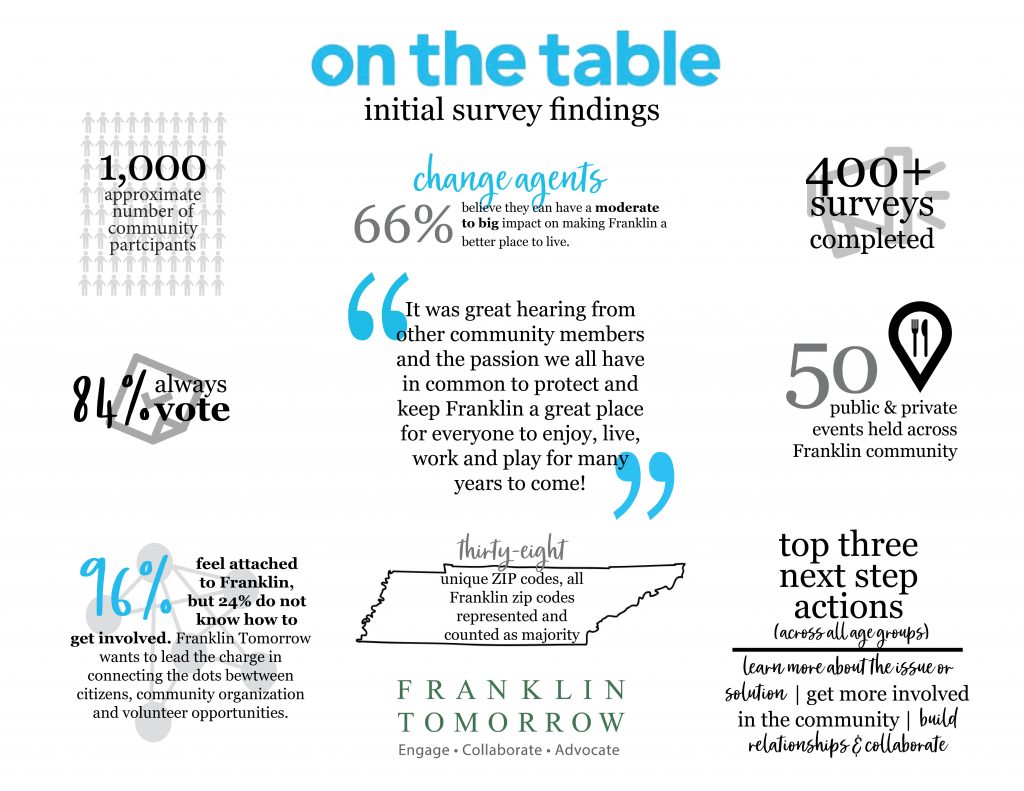