Home/News/Breakfast With Mayors sees huge crowd for rollout of study data on growth, economics
Previous Next

Franklin Tomorrow’s quarterly Breakfast With the Mayors was held to a full house on Tuesday, April 30, at Rolling Hills Community Church. 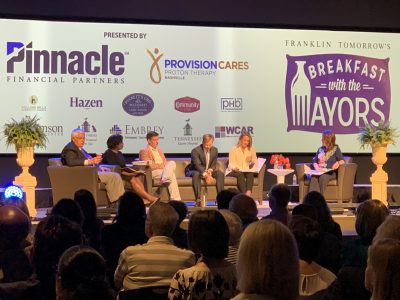 The Williamson County Association of REALTORS® presented the results of a recent study on Population Growth & Economic Impact during Franklin Tomorrow’s Breakfast With the Mayors.

During the program, the Williamson County Association of REALTORS® released the outcomes of a study titled, “Population Growth & Economic Dynamics: A Case Study for Williamson County,” which was completed by the Jones College of Business Business and Economic Research Center at Middle Tennessee State University for WCAR. Franklin Tomorrow Board Chair Allena Bell presented further findings and a report from Franklin Tomorrow’s 2018 On The Table initiative while Williamson Inc. CEO Matt Largen will detailed information presented as part of its Outlook Williamson event, held April 24.

The next Breakfast With the Mayors is set for July 30.

To view the slides regarding the WCAR study, click the link below.

Growth Study for Breakfast with the Mayors 4.30.19 Final