City of Franklin Aldermen Brandy Blanton and Margaret Martin won Franklin Mayor Ken Moore’s Aldermen Walk-Off Challenge and were presented the “Golden Sneaker” trophy on June 11 at the Board of Mayor and Aldermen meeting.

Moore issued the challenge as part of his ongoing collaboration with Franklin Tomorrow’s Get Fit Franklin initiative, which encourages individuals and families to take the first step to fitness by going for a walk in their community or a nearby park. 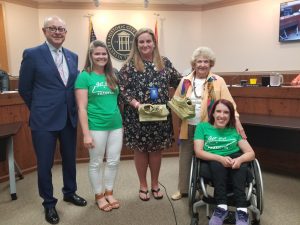 Ward aldermen were paired by Moore with at-large aldermen and encouraged to get their constituents to join them at a specified time to walk one mile. The team with the highest turnout would be the winner and Martin and Blanton were able to generate the highest turnout, according to Staci Davis, Franklin Tomorrow’s director of community engagement and Get Fit Franklin coordinator.

Martin represents Ward 1, which includes downtown Franklin, while Blanton is an at-large alderman.

Get Fit Franklin works with the City of Franklin and other organizations in the Healthier Tennessee initiative. Learn more on GFF’s Facebook page.