Franklin Tomorrow released the final survey results from its 2019 On The Table initiative on Tuesday, Feb. 25, to the Franklin Board of Mayor and Aldermen.

In 2019, Franklin Tomorrow implemented its second series of On The Table sessions to engage the community in intentional conversations around Franklin. The results of the survey largely coincide with the results from 2018 as well as with the National Citizens Survey (NCS) that was produced by the City of Franklin in March 2019.

“We are so happy to be able to share the results of On The Table with the leadership and citizens of the City of Franklin,” Franklin Tomorrow Board President Allena Bell said. “The results of the survey showcase what Franklin is doing right and what we as a community can do to enhance the quality of life for those who call Franklin home.”

Bell served as co-chair of the 2019 On The Table initiative alongside Patrick Baggett, Mary Lee Bennett, and Jim Roberts.

“The On The Table events were an effective way for people who might not normally connect to come together, learn from each other, and create a space where individuals could discuss issues and changes for Franklin,” Franklin Tomorrow Executive Director Mindy Tate said. “I am happy to publicize these results and start working on initiatives to strengthen the City of Franklin and the community here.”

In both 2018 and 2019, participants of On the Table had an overwhelmingly positive view of Franklin, with reports of high levels of attachment, 71 percent in 2019 and 69 percent in 2018, and rating it as an excellent place to live, work, and visit. The group that participated in 2019 is also actively engaged in the community, with 52 percent of respondents saying they are actively involved in the issues they care about. 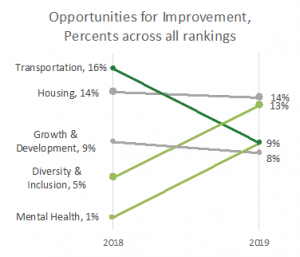 In 2019, On The Table focused on what the top issues are for the citizens of Franklin. The results were consistent with the results from 2018 with some shifts. In both 2018 and 2019, participants identified affordable housing, transportation, and growth and development as top areas of improvement in the Franklin area with diversity and inclusion and mental health emerging as areas of opportunity in 2019. These findings are consistent with the NCS from 2019.

The OTT participants were highly engaged in community life in a number of ways, including donations and volunteering their time. Education was the most popular area to contribute time, talent, knowledge, or skills to in both 2018 (39%) and 2019 (41%), followed by historic preservation (33% in 2019 and 2018). Approximately a quarter of respondents give their time to arts and culture, hunger and poverty, housing and affordability, recreation and youth sports and other areas.

Across all age groups and both years, housing and affordability was not in the top two areas that participants contribute their time to, despite it being a top issue identified as an opportunity and something that is missing in Franklin.

Although Franklinites are actively engaged, there is always room to become more involved in the community, especially in the age group of 29 years and younger. Respondents prioritized addressing housing issues, continuing the conversation, and becoming more involved as top areas to take action to enhance the City of Franklin. There were differences in age group in barriers of engagement, or what is keeping them from being more involved in the community. 57 percent of participants 29 and younger noted that they are too busy or unsure how to get involved while those 50 and older were more likely to already be involved.

The next steps identified by participants were consistent from 2018 to 2019, with most people indicating they planned to build relationships and collaborate, learn more about more about the issues or solution, get more involved and raise awareness and educate others.

“Given the consistency of overall results and the alignment of next steps participants tend to take, Franklin Tomorrow may have learned what it can from this iteration of the survey,” Tate said. “Our next step will be to engage stakeholders to develop a consensus around what we can learn in the context of these survey results, including how we will utilize those learnings.

“A number of areas of inquiry have been discussed in meetings with FT board members, including continuing to understand what issues residents prioritize, supporting the information needs of local non-profits, and building on the culture of community engagement which exists within Franklin,” she said.

The On The Table results are consistent through two years of analysis and showcase what people love about the City of Franklin and what improvements can be made. The full On The Table report is available here: Franklin Tomorrow On the Table Final Report.