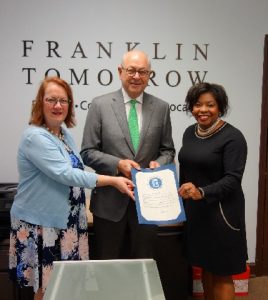 “During the past 20 years, Franklin Tomorrow’s work has had a positive impact on the City of Franklin and its residents through its work to engage the community, foster collaboration, and advocate for a shared vision for the future of Franklin,” said Mayor Ken Moore.

Franklin Tomorrow was founded in early 2000 by a small group of business and civic leaders who recognized something needed to be done to ensure Franklin’s future would be as rich – in meaning and spirit, as well as in buildings and businesses – as its past. Franklin’s essential attributes, those qualities that were at the heart of its attraction, would need to be ensured through a broad-based strategic effort, the founders thought.

Since its founding, Franklin Tomorrow has worked to create an environment that promotes community involvement with events, educational programs, and community forums. Strong collaborations have been formed between the City of Franklin, the local Chamber of Commerce, Franklin Special School District, other nonprofits, but most importantly with and among the people who live, work and play in Franklin. A culture has been created in Franklin to engage the community on a broad array of important topics in a way that keeps the community connected

A special event planned for March 20, with founder Julian Bibb and other members of the original Board and Steering Committee, had to be cancelled due to the Covid-19 pandemic. A celebration with the community is being planned for July 30 at Eastern Flank Battlefield Park.

Franklin Tomorrow’s charter was signed and filed with the State of Tennessee on March 20, 2000, and over the last 20 years, the organization has played an essential role in working to make Franklin a great place to live, work and play. Franklin Tomorrow continues to work to create initiatives and provide programming that enhance Franklin and make it a great place to live, work and raise a family.