Franklin Tomorrow, along with Williamson Inc., held a virtual 20th anniversary celebration as part of The Big Payback on Thursday, May 7. Franklin Mayor Dr. Ken Moore, along with state Rep. Brandon Ogles and state Rep. Sam Whitson, were also in attendance.

During the event, Mayor Moore presented a proclamation to Franklin Tomorrow recognizing “the significant impact 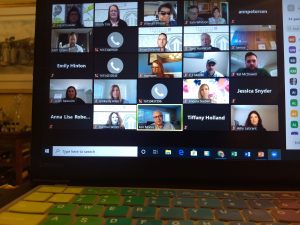 “The City can’t do everything and needs partners. Franklin Tomorrow has been such a great partner, whether we look at Friends of Franklin Parks, whether we’re looking at their participation in Find Hope Franklin, whether it’s getting their help as far as training our community with suicide prevention with QPR training. The list goes on and on and on,” Franklin Mayor Dr. Ken Moore said during the event. “I just see a continued great future and wish Franklin Tomorrow the best of luck for the next 20 years and that they will accomplish doubly what they have in the first 20 years, and I believe that they will,” Mayor Moore added.

Whitson and Ogles presented a joint resolution signed by Gov. Bill Lee. Rep. Glen Casada and Sen. Jack Johnson were also sponsors of the resolution, but were unable to attend Thursday’s online event.

“We just want to tell you how much we appreciate everything Franklin Tomorrow has done for our community over the past 20 years,” Rep. Sam Whitson added, joined by his wife Pam. He recounted the couple moved to Franklin 20 years ago this month, saying, “Franklin Tomorrow has contributed so much to make that happen,” before reading the proclamation.
During The Big Payback, Franklin Tomorrow raised nearly $6,000 donated by 64 unique donors over a two-day period. Franklin Tomorrow will be using the money raised by our supporters to continue its success and celebrate its 20th anniversary, perhaps in late July with a community event, as well as continue existing programs such as Breakfast With the Mayors, FrankTalks, and Get Fit Franklin.

“Yesterday was such a fantastic day and we want to thank Williamson Inc., Mayor Ken Moore, state Rep. Brandon Ogles, state Rep. Sam Whitson and everyone who helped us celebrate our 20th anniversary,” Franklin Tomorrow Executive Director Mindy Tate said. “It is because of our great partners and leaders in Franklin that Franklin Tomorrow will continue to succeed for the next 20 years and beyond.”