Franklin At-large Alderman Pearlene (Pearl) Bransford died Friday, Nov. 27, 2020. A longtime supporter of Franklin Tomorrow, she participated in many of our Vision City Visit trips, as well as regularly attending Breakfast With the Mayors and FrankTalks. She will be missed. 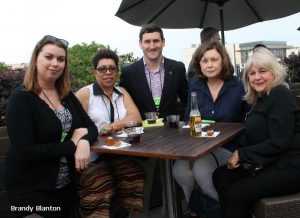 Alderman Pearl Bransford (second from left) with other attendees on the 2016 Vision City Visit trip to Mt. Pleasant, S.C.

Her family were leaders in the Civil Rights Movement.  As a child, she walked in peaceful marches with her grandfather.  These and other experiences inspired her to become a community leader..

She received a BS in Nursing from Tennessee State University,  BS in Health Arts from University of St. Francis, Joliet, IL, and an MS in Nursing  from Vanderbilt University.  She served in a variety of leadership and teaching roles during her 18 years at Vanderbilt Medical Center and was highly respected by the professionals and students with whom she worked.

Pearl   was a supporter of education and previously served on the Franklin Battle Ground Academy Board of Visitors,  Franklin Special School Board 1992-2003 (Vice President for 8 years), and Columbia State Community College – Williamson County Development Committee,  She was the recipient of the 2008 Booker Award which recognizes citizens who are living examples of those who value education and the obligation one has to make their own community. One of her recent concerns was the lack of hygiene products resulting in young girls not being able to attend school.

Pearl was a supported historic preservation. In 2002 she established the  the Natchez Place and worked to place the Natchez Street Community on the National Register of Historical. She previously served on the Boards of the Tennessee Preservations Trust and Carnton Plantation and currently served on the Historic Franklin Masonic Hall Foundation Advisory Board for Transformation of Hiram Lodge No. 7 into a museum.  She participated in various historical symposia at the Hall and was instrumental in arranging the first performance by an African American in the Hall.  An advocate of the Fuller Story project, she  frequently spoke to groups on her experiences in the past and looking to the future.

She was elected to the City of Franklin (TN) as an Alderman-at-Large in 2007 and continued to serve until death.  As Chairman of Sisters Cities of Franklin and Williamson County she made numerous trips to Carleton Place, Canada and Ban Soden, German and attended a tourism expo in Shengdu in support of Economic Development and Tourism. Work Force Housing was a major item on her agenda.    She previously served on the City of Franklin Housing Committee and supported “The Hill” project in Franklin.

Due to the pandemic, there will be no funeral.  Private burial with be with the immediate family in attendance.

In lieu of flowers, memorials may be sent to: