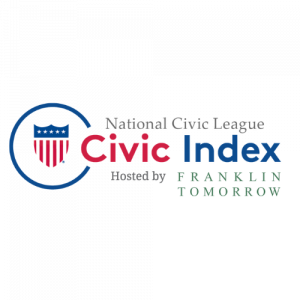 Franklin Tomorrow conducted the conversations in late April through late May at locations across the city, including both indoor and outdoor facilities, as well as private and public conversations.
“We initiated the Civic Index as a follow-up to the City of Franklin’s designation by the National Civic League as a 2020 All-America City,” said Mindy Tate, Franklin Tomorrow Executive Director. “As the city’s partner in pursuing the All-America City designation, we wanted to delve deeper to create a baseline measure of civic capital, which has seven components.”
Those seven components are engaged residents, inclusive community leadership, collaborative institutions, embracing diversity and equity, authentic communication, culture of engagement, and shared vision and values.
“These seven components all contribute to the formal and informal relationships, as well as capacities and conditions, that enable a community to address important issues and make decisions in a collaborative manner,” Tate said.
The Civic Index used an online self-assessment tool completed by participants for measuring a community’s civic capital after they participated in one of the conversations about civic capital across the community, which lasted approximately one hour.
Key findings from the survey results were:
• Franklin has a strong sense of community pride.
• Franklin is viewed as having many organizations bringing people together to resolve pressing conflicts and challenges.
• Neighborhood councils and community groups do not reflect the community’s diversity.
• Embracing diversity and equity are the biggest challenges, with one of the biggest challenge appearing to be getting immigrants, new residents and under-represented groups actively participating in community events and discussions.
• New residents (2 years or less) cited more opportunities for improvement.
Recent data released as part of the U.S. Census indicates more than 80% of Williamson County’s population is white, there has been growth overall in the county in the last 10 years in minority segments, including 24.4% growth in Black residents; 44.9% in American Indian; 134.8% in Asian; 74.6% in Hispanic or Latino; and 42.7% in Pacific Islander. Census data for cities has not yet been released.
High marks were given by 78% of survey respondents to the statement, “We are taking ongoing steps to discuss, learn about, and help address historical barriers to participation, inclusion and employment.”
While 58% of respondents responded favorably to the statement, “We have formal discussions about different issues like race, immigrations, drug addition, etc.,” 41% responded this was a challenge for us or we don’t have these conversations.
Echoing the strong sense of civic pride in the community was the positive response by 80% of respondents to the statement, “People have a clear sense of what makes the community unique and a shared vision for what we want to become in the future.”
More than 70 of the 225 individuals who completed the survey offered to participate in focus groups regarding the Civic Index and the outcomes and dozens of individuals offered responses when offered the chance. Franklin Tomorrow hopes to conduct those conversations through the next few months.
Additional priorities for Franklin Tomorrow will be to get newcomers engaged in Franklin, get under-represented groups to actively participate in community events and discussions, and a further focus on inclusivity and supporting the development of leaders from all backgrounds, ages and sectors.
The Civic Index and Community Conversations are presented in partnership with Vulcan Materials. Additional support comes from Gresham Smith and Chandlerthinks.