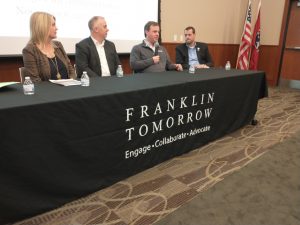 The theme was “City Hall on Wheels,” and Stuckey used the time to review important capital investment projects which have been underway in 2021 and offer some big news – the ribbon cutting ceremony for the northwest extension of Mack Hatcher Parkway is now set for Dec. 13 at 2 p.m., although the road is supposed to open by Nov. 30 under the state contract.

From there, Stuckey used the time to ask aldermen questions about their campaign experience and the preparation they have undertaken prior to being sworn into office on Tuesday, Nov. 9.

To watch the entire session, click the link below.

FrankTalks is held the second Monday of the month, starting at 9 a.m. with a coffee social, followed by the program at 9:30 a.m.