The program will begin at 9 a.m. with a coffee social, followed by the program starting at 9:30 a.m. Franklin City Administrator Eric Stuckey will give a brief presentation on the City of Franklin’s form of government and the roles of elected officials.

To register for the event, go to https://oct9franklintncandidatesforum.eventbrite.com.

“FrankTalks has grown quite a following as a monthly event and through this format, we will be able to offer an educational experience about Franklin’s form of government and the roles of staff and elected officials, as well as provide an opportunity for citizens to meet the candidates and hear their views on issues in our community,” said Tim Murphy, Franklin Tomorrow Board president.

All candidates have agreed to participate in the forum, which will allow each candidate an opening statement and the chance to answer all questions asked by the presenting organizations, as well as questions submitted in advance by the community. To submit a question, send it to mindy@franklintomorrow.org.

Franklin is divided into four wards, with an alderman elected to a four-year term to represent the ward. Franklin also has four at-large aldermen who represent the City as a whole. The City’s mayor is elected by the entire City.

Typically, FrankTalks’ programs last one hour, but this program is expected to last until 11 a.m.

FrankTalks is free and the public is invited. Franklin Tomorrow partnered with Vanderbilt University’s Office of Neighborhood, Government and Community Relations to expand the frequency of FrankTalks in 2016 to a monthly program. It is held at various locations across the city, but always on the second Monday of the month.

The Sept. 11, 2017 Franklin Tomorrow FrankTalks was a deep look into the crisis of opioid use and abuse in Williamson County, with a panel of individuals with hands-on knowledge of the rising tide locally.

“Facing the Opioid Crisis” was held in partnership with the Williamson County Anti-Drug Coalition (WCADC) to educate the community about the use and misuse of opioid drugs and the crisis that has hit the nation and the state and is creeping into Williamson County.

You can watch the video below, provided by the City of Franklin’s FranklinTV, or the Williamson Herald story through this link. 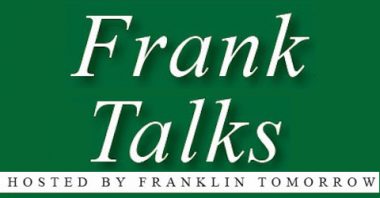