On April 21, 2022, Williamson County lost Jimmy Gentry, one its favorite sons. The 96-year-old World War II veteran, coach, teacher, farmer, storyteller, artist, father, grandfather, and friend left an indelible mark on the community and a dedicated group of citizens are committed to making sure he will be remembered in a prominent and permanent way with a bronze statue placed at Five Points in Downtown Franklin.

Gentry’s influence and impact has been poured into generations of locals – for some that was in a classroom, for others on a football field and for many, on the bucolic grounds of the beloved Gentry Farm. Throughout the last two decades he would share the stories of his life as depicted in his book “An American Life” and became a gifted story-teller to captivated audiences from one to hundreds. 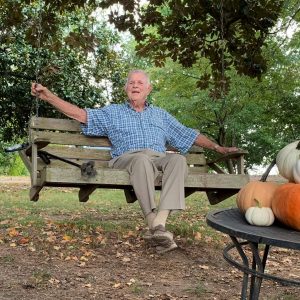 Coach Jimmy Gentry sits on the swing on the seven-generation farm he called home for many years before his death in April 2022.

It became tradition for him to speak annually to the classes of Leadership Franklin as a part of History Day. Gentry would sit on the wooden swing in front of his home at Gentry Farm under the century-old Magnolia tree. The Franklin native would share glimpses into his childhood and growing up without the influence of his father who passed away when he was 12-years-old. Stories of a simpler time when he and his brother would hunt rabbits for their dinner and later bask in the sun and jump in the water of the famed Willow Plunge. It was a time when everyone knew each other and Franklin was a very small town – one where the telephone operator could tell you who was at the doctor or grocery when you tried to reach them by phone.

Gentry would talk about his love and admiration of his mother who raised eight children alone and declared that “anything good about me is because of my mother”. The same woman who instilled in their children to “never take the last biscuit” because there is always someone who needs it more.

Gentry’s stories would come to life with his talent of painting a picture with his words – making you feel like you were in the moments with him. One of his memories was of a particular “rock fence” that still stands today that surrounds the Historic Presbyterian Church on the corner of 5th Avenue and Main Street. Gentry shared the significance of that wall as farmers used to gather on Saturdays to sell their wares, or children would climb atop it and balance their way from end to end.

However, one of the most poignant things that happened at that wall was in the mid-1940s when young men would sit there waiting for a particular bus to arrive. And when it did, if your name was called … you were headed off to war to serve your country. Even after losing his brother to war, Gentry would enlist and his name would be called along with several of his friends. Many of those young men would not return, but thankfully, he did.

His voice would soften as he moved on to the next chapter of his life as a young man far away from home who served in the United States Army as a foot soldier, witnessing one of the most horrific scenes, as he and his troop stumbled upon the concentration camp at Dachau.

After he returned from the war Gentry would marry “the prettiest girl in Franklin”, Rebecca Chanell, and build their lives on her family property, Pleasant View Farm (circa 1849). Gentry would spend 66 years coaching football at three local schools: Franklin High School, Brentwood Academy and Battle Ground Academy.

The seven-generation farm would become Gentry Farm and diversify their farming efforts over the years to include raising beef cattle and growing hay, although they would become widely known for their pumpkin crop as school groups and the public visit every fall to experience the nostalgic slice of Americana. For natives and newcomers alike, the Gentry family is an iconic part of who we are as a community, although the origin of that notoriety is through their patriarch, Jimmy Gentry.

Paying Homage
The idea of honoring Gentry with a statue came years before his recent passing. Franklin Vice-Mayor Brandy Blanton (Leadership Franklin Class of 2007) experienced Gentry speak from his swing on her class’ History Day and a close friendship was spawned.

Ten years later, as the City of Franklin Public Arts Commision was being formed, Blanton was struck with an idea for the perfect piece of public art, a bronze statue of Gentry on the “rock fence” celebrating his contribution to our country, but also the other boys who would leave Franklin from that rock wall to do the same. 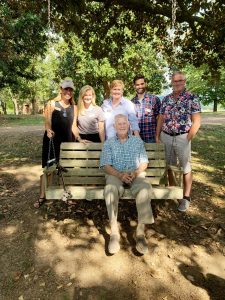 Blanton shared that vision with her good friend, Carrie Drury (Director of A Vintage Affair), who whole-heartedly agreed with the idea. Soon after, Drury would be selected for the Leadership Franklin Class of 2020 and placed in a project group alongside Ondrea Johnson (Director of Williamson County Animal Center), Lance Jordan (Executive Director of Waves, Inc.), Michael Damico (owner of Damico Frame and Art Gallery) and Stacey Downs (Owner, Cobra LLC). Tasked with finding a group project, this team would grab the baton and give the vision legs. Their passion for the project was bolstered after experiencing Gentry speak to their class from that same swing under the Magnolia on History Day and the opportunity to capture a video of him speaking about that memory.

The groundwork was laid, including permission from the Gentry family and securing a sculptor, Clarksville resident and firefighter, Scott Wise. The initial plan was to feature Gentry as a young man sitting on the “rock fence” as depicted in the story he shared. However, the group pivoted to create the art piece of a modern-day Gentry sitting on a bench at Five Points reflecting on his memories situated directly in front of the rock wall. Jimmy Gentry actually posed for the piece in his likeness and fundraising efforts were set to begin, however, the pandemic brought a halt to their efforts and the remainder of their Leadership Franklin experience.

After Gentry’s recent passing, it was evident the project must happen, and the group came back together to see it to fruition with the family’s blessing. With their focus on public art, Franklin Tomorrow has been identified as an additional partner, who will accept tax-deductible donations from everyone who wants to be a part of this legacy project accompanied by a plaque that will read:

This statue in the likeness of Franklin, Tenn. native and World War II U.S. Army veteran Jimmy Gentry (1925-2022) as he reflects on the rock wall and the memories of waiting there for the bus that would take him and many others off to war to fight for our country – many of whom would never return.

The goal is to secure the estimated $85,000 from all of those who were influenced by this incredible man and host a community unveiling in the spring of 2023.
Tax-deductible donations will be accepted by Franklin Tomorrow (online) after the Franklin Board of Alderman’s expected approval of the project on Tuesday, August 16. Checks may be sent to P.O. Box 383, Franklin, TN 37065.

FRANKLIN TOMORROW: Franklin Tomorrow is an independent, community-visioning nonprofit created in 2000 by a group of forward-looking business and community leaders to safeguard the attributes that made Franklin special then for future generations. The mission is to engage the community, foster collaboration, and advocate for a shared vision for the future of Franklin. Through research, programs and engagement with citizens, that shared vision is for Franklin to be a city with robust neighborhoods, a vibrant economy, distinct character and great people.

LEADERSHIP FRANKLIN: Founded in 1996 to develop leaders in Franklin and Williamson County, Leadership Franklin strives to provide a class of twenty members with knowledge, network connections, and resources to bring new ideas to the table for Franklin and Williamson County. The carefully chosen group proceeds through a series of leadership development classes (one class a month for nine months from August through May). Other partners include: City of Franklin, Battle Ground Academy and Franklin Parks Department.